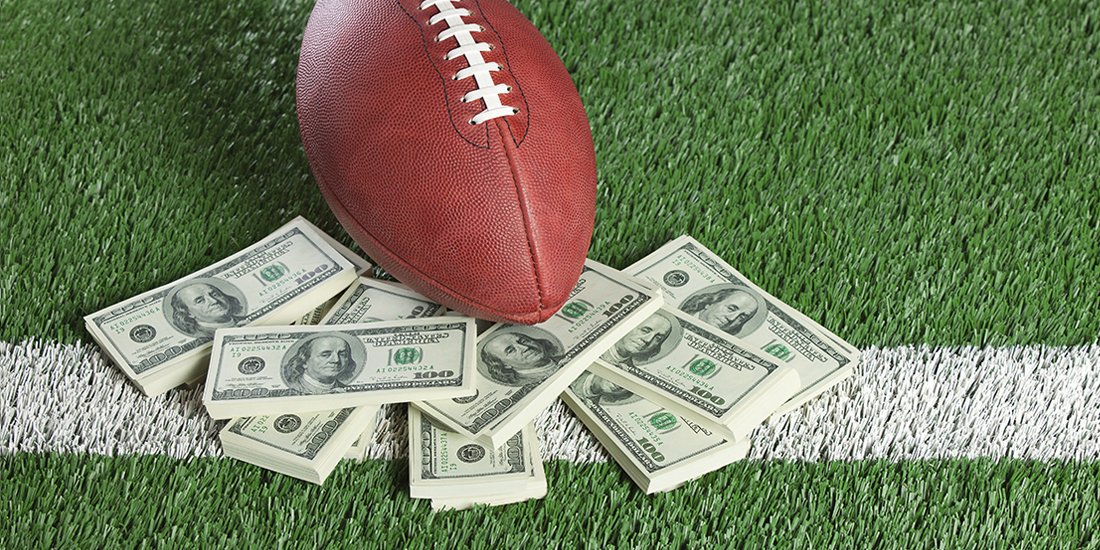 College athletics is facing an existential crisis. Another unexpected 2020 headline, but here we are. And if you’re one of the many Americans who eagerly await tuning in to a nationally televised football game on a fall Saturday afternoon, that headline is probably a punch to the gut. This fall there won’t be millions of screaming fans packed into stadiums, which spells potential disaster for college sports.

The coronavirus pandemic has significantly reduced revenue potential for football and basketball, which has been compounded by the reduced tuition income from lower enrollment at schools in the short term. As a result, schools have resorted to cutting non-revenue sports such as tennis, track and field, swimming and diving, and golf. As of now, 19 Division I schools have cut a combined 57 programs.  Division II & III and junior colleges have eliminated dozens more.

The results of a recent Gallup survey indicate college athletes are more likely to be thriving than their non-athlete counterparts when it comes to health, relationships, community engagement and job satisfaction. Taking away opportunities to be part of team sports at the college level will have negative impacts to student athletes that miss out in the short and long term. As a former Division 1 college golfer, I can attest to the overwhelmingly positive influence my four years of college athletics had on my personal development.

Not to mention, eliminating non-revenue college sports will have a major impact on the Olympic model. The U.S. Olympic model leans on these college programs that serve as launchpads for athletic careers and an ideal space for high schoolers hoping to develop into elite competitors. Nearly 80 percent of the 558-member U.S. Olympic team in 2016 competed at the college level, representing close to 150 schools.

For purposes of this discussion of the business of college athletics, let’s focus on the 130 institutions that are in the NCAA Division 1 Football Bowl Subdivision.  Half of these schools fall in the Power Five Conferences and are commonly referred to as the Autonomy schools, the other half are Non-Autonomy.  There is a stark divide in terms of overall revenue and the respective revenue sources between these groups.

Autonomous schools account for 75% of the $10.6B in NCAA Division 1 revenues and only 7% of their funding comes from institution, government support and student fees. Conversely, Non-Autonomous schools require institution, government support and student fees to cover more than half of athletic funding. At a time when state and municipality budgets are being squeezed and universities and colleges will be under financial stress due to lower enrollment, the stress on Non-Autonomous schools will be exacerbated.

Most college athletic programs are lucky to break even. But even before the pandemic, many schools (especially in the Non-Autonomous group) were struggling to make ends meet. For the Autonomous schools, coaching and administration compensation are a huge burden, representing nearly 40% of annual expenses overall.  Student scholarships and aid, gameday operations, and travel are relatively small proportions of the cost. 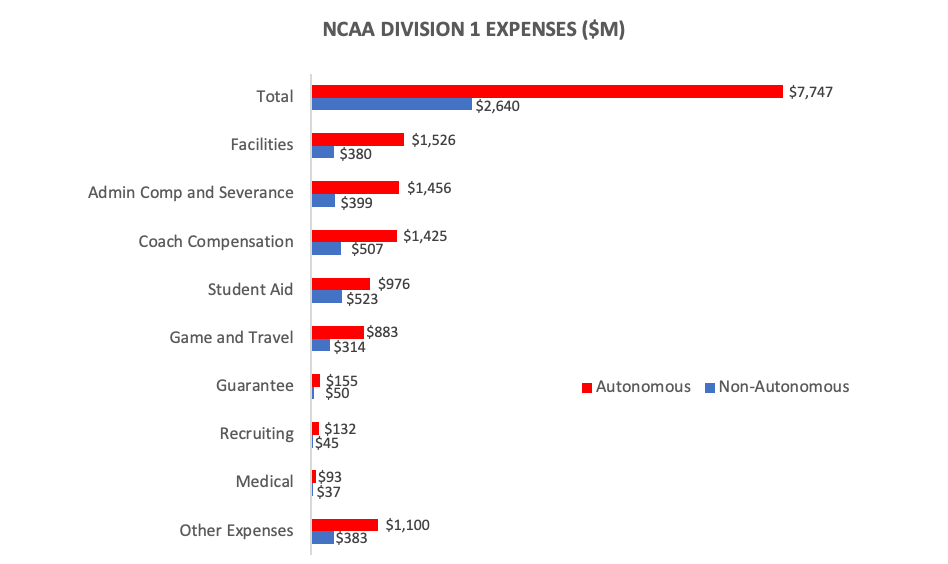 With costs rising much faster than inflation and schools facing a shortfall in media and bowl revenues, the only choice some schools felt they had was to eliminate entire programs. Administrators were forced to make decisions that they haven’t ever had to consider with a rushed timeline that gave them little chance to look at things holistically.  But sometimes, what appears as a catastrophe, could spell opportunity.

It is exciting and educational for the athlete to travel all over the country, but a regional or even local schedule beats no sport at all.  Many schools could develop a set of games, tournaments or meets within their own state or neighboring states and significantly reduce travel costs.  And there is a chance to develop some new in-state or nearby rivalries that have never had a chance to foster because schools were in different conferences.

There is a significant opportunity to match the demand of live college sports content with the shortfall of new programming available for TV and streaming platforms.

Production sets are on pause due to coronavirus safety concerns, putting a halt to new films and shows.  Additionally, professional sports have been on hiatus and will have the start of their seasons shifted. This gap can be filled with amateur sports. Work with the NCAA to create its own subscription-based streaming service or go to ESPN+ or others.

Leverage the hunger for live sports with a new model. If these avenues don’t provide opportunity, colleges can live stream the sporting events on YouTube with sponsors. Production costs can be reduced by utilizing the school’s in-house film and marketing students. Use well-known alums to serve as play-by-play or color commentators to draw people in while keeping costs to a minimum.

Beyond the competitions themselves, everyone loves a heart-warming story of personal triumph over long odds.  These stories exist in every sport on every campus.  Develop a business model to sell this content to streaming platforms that can help distribute the story while filling their own content gaps.  And it is also another opportunity to leverage in-house storytelling from film and theatre students and professors.

Re-think the way programs are supported by alumni and the community.

Develop structured programs that give people status to football or basketball tickets if they contribute to non-revenue sports.  Many alumni play tennis and golf recreationally – two sports that are on the chopping block – and they may have considered helping out.

Make sure alumni understand the impact they can make with their support.  Match alumni to specific athletes for sponsorship. Provide them with regular updates on the team and recognize their contribution with something of substance.  Twenty-eight years after graduating I still wear new UConn Golf gear every chance I get.

Maximize use of resources in the Sports Management program if there is one.

Use students and assistant professors to play a role in scheduling, fundraising, game-day management, and other duties to reduce administrative costs and provide them with real-world experience.

Re-assess the way coaches are compensated.

For high profile sports, coaching compensation has become an arms race with spending reaching new heights every year.  Most states list their highest paid state employee as a football or basketball coach at a large university.  And most contracts are guaranteed so when a school parts way with a highly paid coach, the salary is often paid out for one or more years.  The desire to compete in these highly visible sports may make it too difficult to break the mold on that compensation, but for other sports, make sure coaching compensation is in line with full professor salaries.

Maybe all of these ideas, and more, were considered before schools decided to cut non-revenue sports.  But at a time when entire programs are being eliminated, we owe it to the college athletes to explore long-standing models to see if programs can thrive in a different way.  There is so much upside in maximizing the opportunities for student athletes.